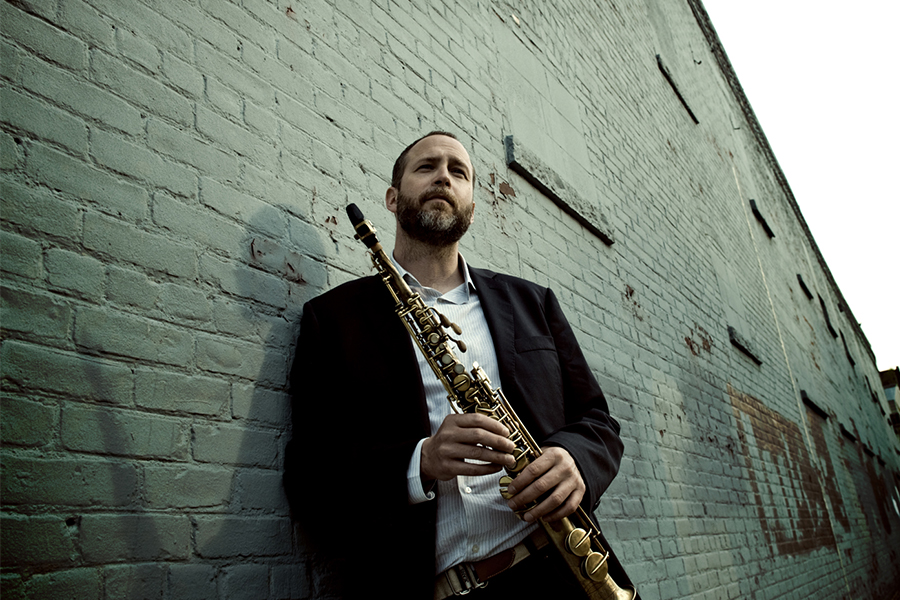 Montreal-born, Vancouver-raised tenor and soprano saxophonist/composer Michael Blake has established himself as a leading voice in contemporary music. For the last 30 years he has made his home in New York City, where he consistently creates music that bristles with originality and vision.

He has released 15 recordings as a leader or co-leader and performed on countless sessions with other musicians, has scored music for TV and film, and performed in halls, clubs and festivals worldwide. Most recently he has also lent his talents to projects led by musicians such as Henry Butler/Steven Bernstein Hot 9, Michael Bates, Erik Friedlander and Ben Allison.

In 2014 he was commissioned by the Vancouver organization Barking Sphinx to compose a suite commemorating the 100th Anniversary of Canada’s 1914 Kamagata Maru Tragedy, a socio-political tragedy that eventually resulted in the deaths of 19 East Indian would-be immigrants who were on that ill-fated freighter. The premiere of Komagata Maru Blues took place at The Vancouver International Jazz Festival. In early 2015 he received a funding from The Canada Council for the Arts to record his work for Songlines Records. The ensuing album ‘Fulfillment’ was released in early 2016 to great critical acclaim. Along with ‘Fulfillment’ Blake’s steadfast output his year continues with the release of Red Hook Soul (Ropeadope) and Transmissions (For Tune) by Made in China, a collaborative trio with Swiss trombonist Samuel Blaser and American drummer Michael Sarin. In 2013 Michael received Chamber Music America’s New Jazz Works Grant for which he wrote the music for Tiddy Boom (Sunnyside), a hard swinging homage to tenor titans Coleman Hawkins and Lester Young that continues a legacy of rave reviews and ‘Best of the Year’ lists for Blake.

His tenure with John Lurie and the Lounge Lizards lasted from 1990-2000 and includes numerous record dates, TV appearances, a live concert film from Berlin, and film soundtracks such as the Grammy nominated score for Get Shorty. During this period he was also a Composer in Residence in the Jazz Composers Collective, a nonprofit, musician-run organization dedicated to presenting original works.

Michael is a respected teacher and has conducted workshops and classes in the US, Canada, Mexico, Denmark, Italy, Brazil and Thailand. He was on faculty at the Fondazione Siena Jazz (2009-2013) and substitute teaches at New York University and The New School.

Another important group he co-lead was the instrumental band Slow Poke. With a cunning and young rhythm section urging him on, his Copenhagen based group Blake Tartare gave Blake a huge creative boost. The band toured extensively and recorded 3 albums for Stunt Records including The World Awakes, an ambitious tribute to saxophonist Lucky Thompson. Michael has recorded and toured with other projects including the NYC power band Hellbent, a Canadian based group called The Variety Hour, his Tiddy Boom Quartet, and the Michael Blake Trio. 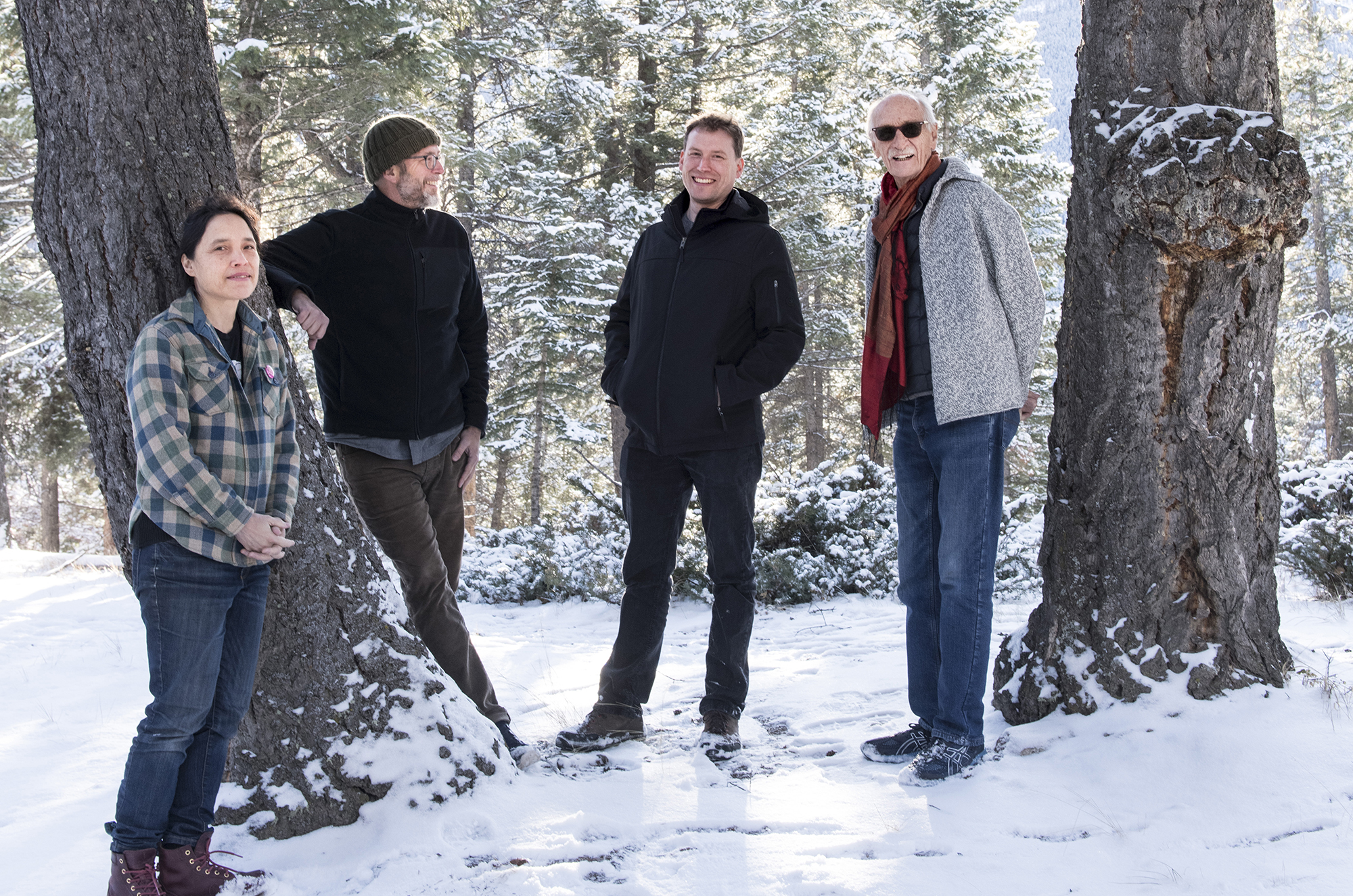 Formed in 2019 the New Canadian Art Quartet is a creative music ensemble focused on performing improvised and original works. The group includes four of Canada’s leading improvisers, each known for commanding a distinctive voice on their instruments. Founded by legendary drummer Jerry Granelli, saxophonist Michael Blake, cellist Peggy Lee and pianist Chris Gestrin, the NCAQ is propelled by three generations of professional experience. The instrumentation includes cello, acoustic piano, woodwinds and a variety of percussion instruments, with each player inhabiting an expansive world of sonic possibilities. Combining both traditional and alternative techniques, the group practices the art of ‘spontaneous composition’, a creative process based on a group mindset. This creative process has been the focus of the eldest member of the group, percussionist Jerry Granelli, who has been performing and teaching this technique for almost a half century.

Each member is a prolific composer and bandleader in their own right. Jerry Granelli has made music with some of the biggest names in the music business. Originally from the Bay Area of California, he became synonymous with the new sound of the 1960’s. Jerry’s own career spans the history of jazz, rhythm and blues and world music. Ironically, of the four members he is the newest to become a Canadian citizen. Michael Blake was born in Montreal and spent his youth moving with his family between Canada and the US. They eventually settled in Vancouver, BC where he took up the clarinet and saxophone. He moved to New York City in 1986 where he has remained a constant on the scene. Vancouverites Chris Gestrin and Peggy Lee are recognized as central figures in the Canadian creative music community. Gestrin received his Masters in film composition at Berklee School of Music and is heavily in demand in the fields of visual media, audio production and live performance. Peggy Lee is internationally renowned for her tone, technique and melodic approach on the cello. She is a leading figure in the Vancouver avant garde music scene yet equally comfortable performing Classical Music. 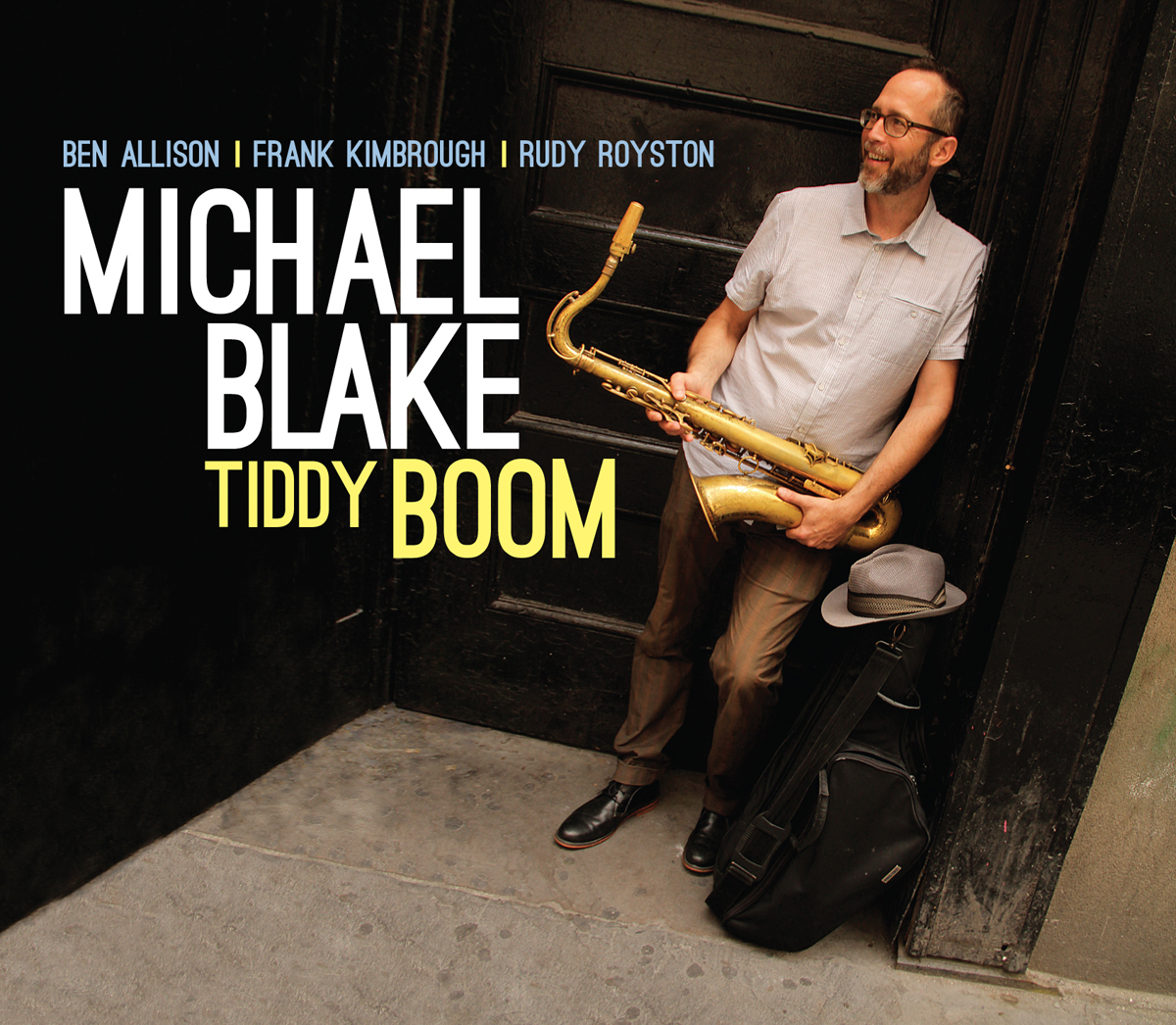 The New York City based saxophonist Michael Blake has built his reputation by producing albums that “make the familiar sound fresh” (Jim Macnie, Downbeat). That statement couldn’t apply better than to Blake’s new release, Tiddy Boom, his nod to the magnificent tenor saxophone innovators Coleman Hawkins and Lester Young. Recorded in January 2014 and set for release on Sunnyside Records (October 28th, 2014), the session sounds like a classic recording date from the 1950s or 1960s.Tiddy Boom reunites Blake with two of his former Jazz Composers Collective colleagues, bassist Ben Allison and pianist Frank Kimbrough, who, along drummer Rudy Royston, provide effortless support for Blake’s tenor sax to flow in any direction he chooses on his program of all original compositions. 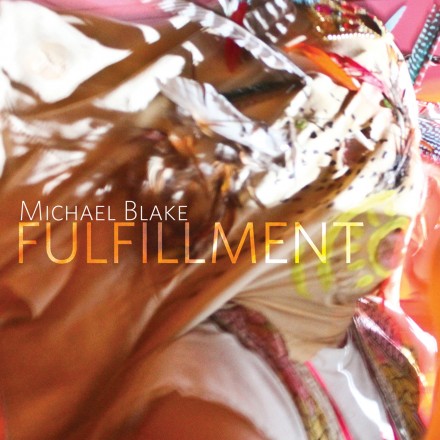 “Blake gets incredible range from his band here…beautiful stuff for our ears…[not] any less great than Joshua Redman or Banford Marsalis or even Sonny Rollins.” – Will Layman, PopMatters, Reviewing In The Grand Scheme Of Things

Over the last 9 years, New York saxophonist Michael Blake has been periodically returning to Vancouver, which he left in 1986, to create and record new works with his pick of Vancouver improvisers. Amor de Cosmos (2007), a sextet somewhat inspired by his BC roots, featured Chris Gestrin, Dylan van der Schyff and André Lachance. In the Grand Scheme of Things (2012) was by his Variety Hour quartet (Gestrin, van der Schyff and JP Carter). This new release, his most ambitious in terms of writing and arranging, adds cello and guitar plus guest instrumentalists and, on two pieces, Michael’s own lyrics. 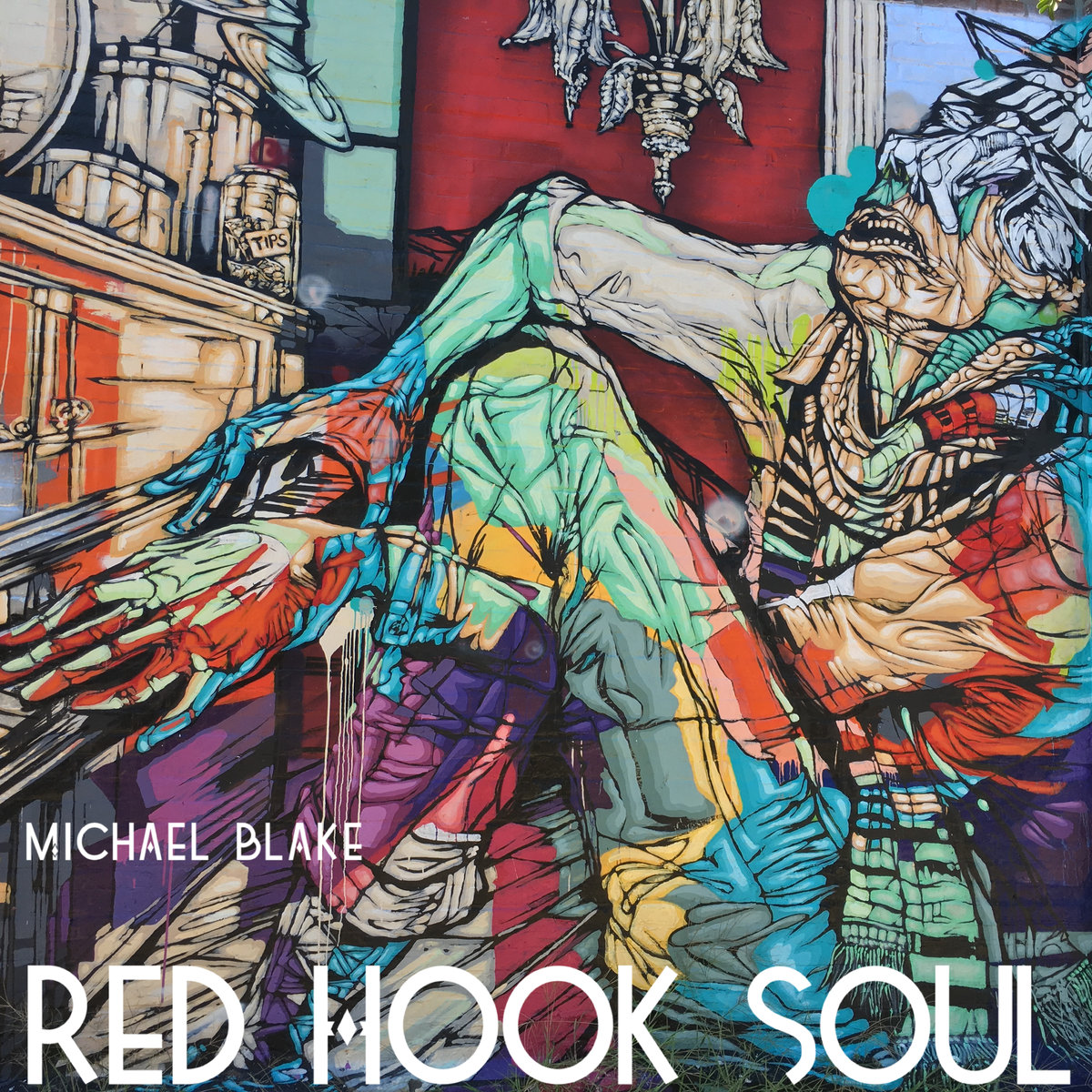 There’s usually some kind of thesis to each of Michael Blake’s albums, whether they’re about integrating Vietnamese music with jazz (Kingdom of Champa), paying tribute to his saxophone heroes Coleman Hawkins and Lester Young (Tiddy Boom), or mixing European and North American approaches to improvisation (Blake Tartare). So it’s not strange that the essence of the Montreal-born, Vancouver-raised saxophonist’s new Red Hook Soul can be reduced to a single sentence—although the sentence in question isn’t one that’s often applied to jazz albums. “It’s got a great beat, and you can dance to it” is Blake’s motto on the new disc, and he meets his goal handily. As its title suggests, Red Hook Soul is a tribute to African-American pop music of the 1960s, a point driven home by the record’s Otis Redding, Gladys Knight, and Ray Charles covers. (Also reworked are Lana Del Rey’s “Video Games” and jazz innovator Rahsaan Roland Kirk’s “Volunteered Slavery”, just to mix things up a bit.)