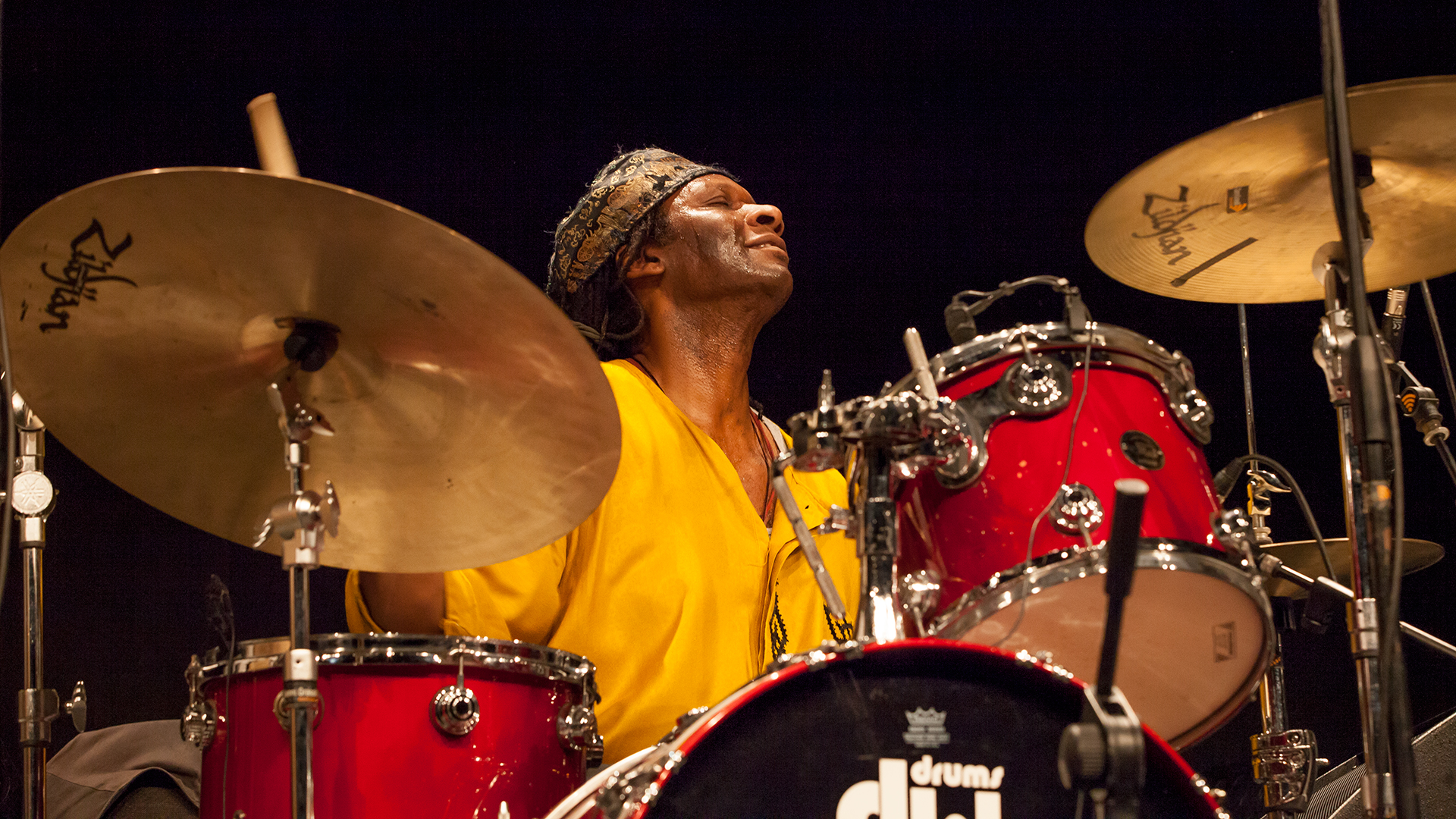 Drake worked with Anderson from 1974 to 2010 including on Anderson‘s 1979 The Missing Link. At Fred Anderson’s workshops, a young Hamid met Douglas Ewart, George Lewis and other members of Chicago‘s Association for the Advancement of Creative Musicians (AACM).

Another of the most significant percussion influences on Drake, Ed Blackwell, dates from this period. Hamid‘s flowing rhythmic expressions and interest in the roots of the music drew like~minded musicians together into a performance and educational collective named the  Mandingo Griot Society, which combined traditional African music and narrative with distinctly American influences. Career. Don Cherry, who Drake first met in 1978, was another continuing collaborator. After meeting Don Cherry, Hamid and fellow percussionist Adam Rudolph travelled with Don to Europe, where they explored the interior landscape of percussion and shared deeply in Mr. Cherry‘s grasp of music‘s spiritually infinite transformational possibilities. Drake worked extensively with him from 1978 until Cherry‘s death in 1995.

Drake was one of the founders, along with Foday Musa Suso and  Adam Rudolph, of The Mandingo Griot Society. His other frequent collaborators include New York bassist William Parker,  saxophonist David Murray,  composer and percussionistAdam Rudolph, German free jazz saxophonist Peter Brötzmann and drummer Michael Zerang. Drake performing with Iva Bittová in Moscow in January 2014.

Drake has frequently appeared with jazz legend Archie Shepp in various configurations. The most common is the group Phat Jam along with human beat boxer and rapper Napoleon Maddox. Drake also works with Maddox in the jazz hip hop group ISWHAT?!. Drake performs with European jazz groups, recording with Hungarian musicians such as Viktor Tóth and Mihály Dresch, also releasing projects with Polish saxophonist Mat Walerian. In addition to the drum set, Drake performs on the frame drum, the tabla, and other hand drums.

Since 1990 Drake has collaborated with fellow percussionist Michael Zerang to present annual winter solstice concerts. For the past 25 years both musicians have been committed to return to Chicago, IL from wherever in the world they are performing to stage the event which commemorates the northern hemispheres shortest day. About the event Drake has said, “The solstice is an important time for all people of any religion or race, because it’s about the cycling of the earth itself, and nobody can really claim that. It’s a time of the year when a lot of people are home and visiting, and we wanted to create something that people would enjoy at that particular time, regardless of whatever they might be following. I think it just kind of naturally turned into this continuing event. I don’t think that we planned it at the beginning.” 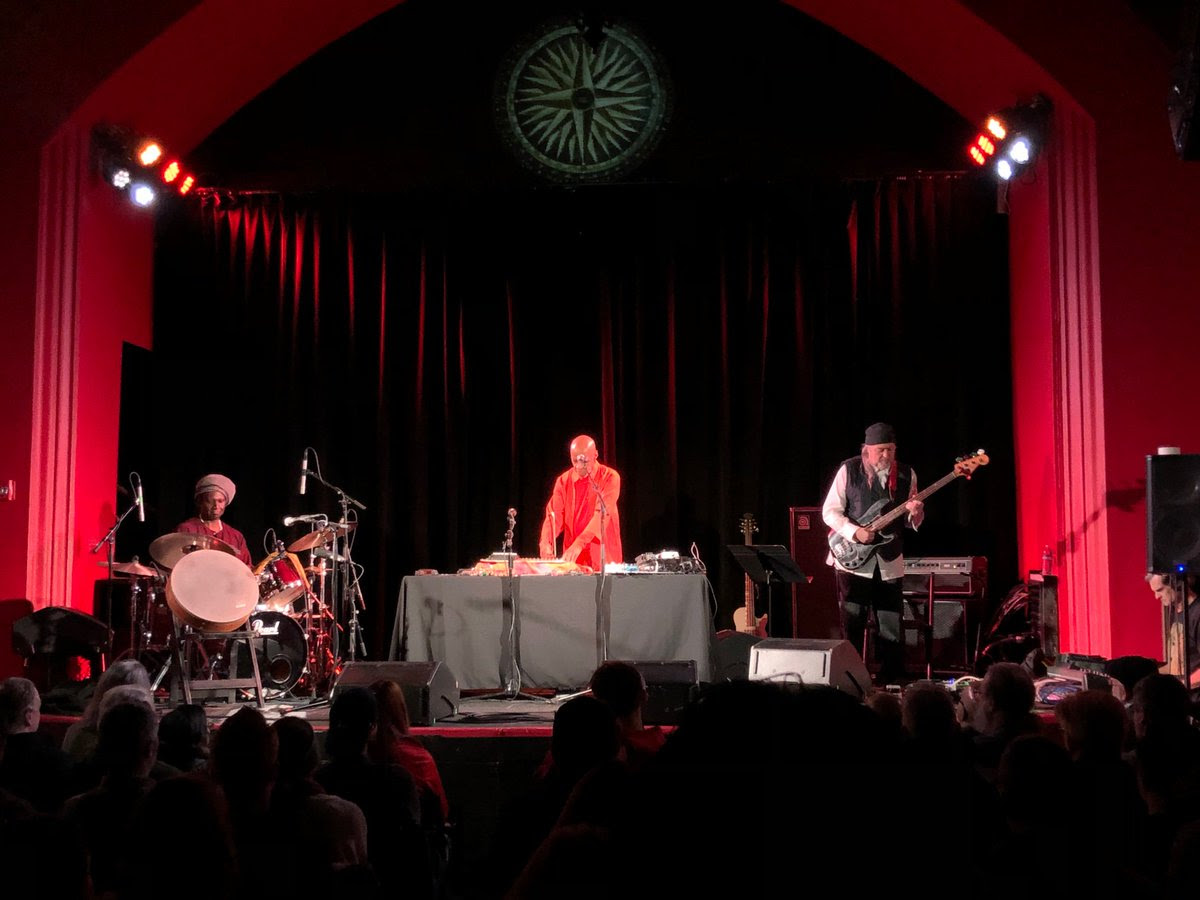 Bill Laswell (b. February 12, 1955 in Salem, Illinois and raised in Albion, Michigan) is an American bassist, producer and record label owner. He was married to Ethiopian singer Ejigayehu Shibabaw alias Gigi. Laswell ranks among the most prolific of musicians, being involved in hundreds of recordings with many musicians from all over the world. Laswell’s music draws upon many different genres, most notably funk, various world music, jazz, dub and ambient styles. He has also played or produced music from the noisier, more aggressive end of the rock spectrum, like hardcore punk and metal.

While most listeners know Hamid Drake as one of jazz’s best percussionists, he also happens to be one of the  finest reggae drummers. Before the demands of the road took him away from Chicago for much of the year, he worked with many local reggae outfits, and the music still courses through his veins. Drake has been using the moniker Bindu as the name for a variety of focus-shifting lineups, but the one that released Reggaeology (Rogue Art) in 2010 might be the most rewarding of them. As the name suggests, the project allows Drake to merge his deep investment in reggae with his mastery of improvised music.

The frontline features trombonists Jeb Bishop and Jeff Albert in a not so subtle to salute to the ubiquity of the instrument in Jamaican music—thanks to the brilliance Skatalites trombonist Rico Rodriguez—and guitarist Jeff Parker helps hold down the music’s infectious syncopated grooves while tracing out the chordal shapes (to say nothing of unleashing some typically corrosive solos) in Drake’s sturdy compositions. Still, Drake refuses to limit the band to just Jamaican music. Cincinnati poet and beatboxer Napoleon Maddox adds extra rhythms and delivers spiritual spoken word, while bassist Joshua Abrams connects with the drummer in a shared predilection for traditional global grooves, shifting to the bass-like Moroccan guimbri when Drake moves to frame drum. Finally, the powerhouse Chicago vibraphonist Jason Adasiewicz will also join the group.

Indigenous Mind may also be called Primordial Mind. It is something we all possess. It belongs to everyone and every culture at its root. Indigenous Mind, even though it is always present, still has to be discovered. We attempt to do that with music and art. Going beyond the illusion of performer and audience and allowing ourselves to enter, touch, feel, sense, and enjoy the oneness of the shared energy of open space.

Peter Broetzmann , Hamid Drake, William Parker begin performing together in 1995. In 2003 The All Music Guide called the band “one of the leading ventures in the history of avant-garde jazz.” Since changing music history with his 1968 album Machine Gun Peter Broetzmann has never slowed down. His collaborators read like an international who’s-who of the most influential jazz & experimental musicians of the last half century. In 1995 the Village Voice called William Parker “the most consistently brilliant free jazz bassist of all time.” As band leader, composer, author & instrumentalist Parker is among the most influential artists in Jazz. One of the world’s most widely respected drummers, Hamid Drake was born in Louisiana in 1955 & grew up in Chicago playing jazz, reggae & world musics. The trio represents the most distinguished and influential artists in improvisational jazz’s history. Saxophonist Brötzmann’s explosive “kaput music” meets the spectacularly flexible rhythmic interplay of percussionist Drake and bassist Parker. Their sound is at once deeply singular and suggestive of world traditional musics from all over the map.

In collaboration with Francesca Scarinci Exb.

The Catch of a Ghost 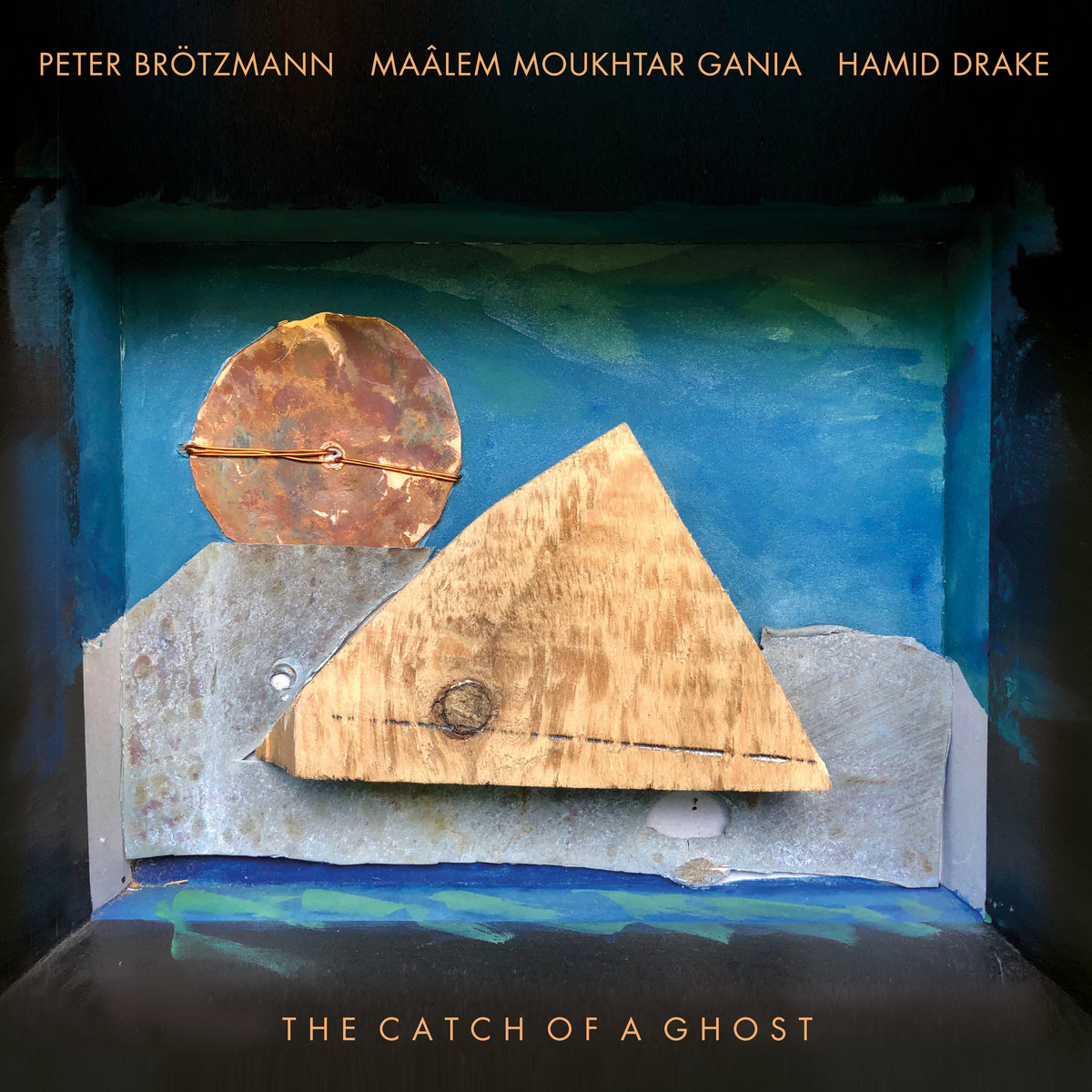 “3 names, 3 cultures, 3 continents, 3 different concepts of time and timing – this is the essence of this trio. This is what we have to bring together. I am rather optimistic.” Peter Brötzmann, Wuppertal, 1st April 2019

With these simple words Peter Brötzmann, one of the greatest representatives in the development of a unique European approach to free improvisation since the ‘60s, announced the unprecedented trio lined up for his return to AngelicA festival in 2019. A trio in which, to the trusted Hamid Drake – one of the best living drummers and his historic collaborator since the times of the Die Like a Dog quartet –, he added Maalem Mokhtar Gania, last representative of a legendary line of Gnawa music masters from Essaouira, son of Maalem Boubker Gania and brother of Maalem Mahmoud Gania, who died prematurely and had been the protagonist with Brötzmann and Drake of an explosive trio in Wels in 1996.

The Bologna trio documented in the CD The Catch of a Ghost thrilled and surprised the attending audience with the great energy and liveliness of the sound textures created by the dialogue among the musicians, but also with the continuous ability to (re)invent itself coupled with boundless physical force of Brötzmann’s emission, who proved that at the age of 78 that he has nothing to envy to his younger self of 50 years ago, at the beginning of his career.